Smedmore House is delighted to announce that the redecoration of the Dining Room has just been unveiled. Here are some early photographs – more to follow soon when we have put the furniture back.

Sunday February 4th 2018:  Kimmeridge will star on BBC Countryfile’s Winter special this Sunday at 6.30pm on BBC1.  The programme will feature James Warren of the Salt Pig in Wareham (former Kimmeridge resident) and Nick Ford, the Kimmeridge fisherman.  View details of programme

It’s booked solidly until July 2019 with an 18 month waiting list.   The story was covered in several newspapers and magazines including the Sun.

IDEA: If you can’t wait that long for those wonderful views of the Kimmeridge shore line, why not consider renting Smedmore House for a weekend or longer?

Filming for the episode of Electric Dreams took place in Kimmeridge over two days in April.

Fans of the Channel 4 show will recognise Kimmeridge Bay and the well-known landmark Clavell Tower in this Sunday’s episode: Crazy Diamond – the fourth in the 10-part series based on the short stories of Philip K Dick. 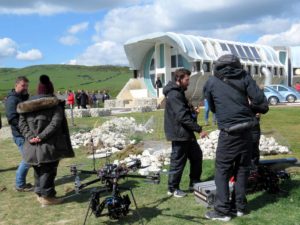 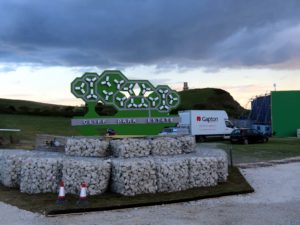 Come over the ridge and there it is, the gleaming, heart-lifting sea. Then a thin swoop of road descends from the chalk downs to the terrace of rough grass, and the rocky beach curving in a smile. Everything about Kimmeridge is quiet and great. The sea meets the land as it must have done for centuries. Most people potter on the beach, or climb the cliffs and follow the coastal path to the Clavell Tower, a 19th-century wedding cake of a folly.

I walk east around the bend, and pick over rocks to some lovely flat pavements that run into the shallow sea. Cut by crisscrossing straight lines, the rocks are mysterious and beautiful, and behind them dark cliffs rise in layers of shale and mudstone, containing untold creatures trapped millions of years ago. Walk along for a while. A raven croaks, a kestrel keens. Every so often the cliffs release a shower of shale, which lands on the rocks with a light pattering that mixes with the shush of the waves.

A mile away in Kimmeridge village, Clavell’s sells light lunches and cream teas, and across the road the new Museum of Jurassic Marine Life displays the finds of a local plumber, Steve Etches, who has devoted much of his life to fossil-collecting in Kimmeridge Bay. The specimens on show are astonishing, not least for their ferocious dentistry; pair after pair of serrated jaws frozen in a last gape.

Back by the sea, on a quiet autumn afternoon, nothing much is happening. The ancient rocks are warm in the sunlight. Little anemones shine like half-sucked boiled sweets, and bouquets of bladderwrack sway with the waves. I sink into a daze. Two paddleboarders glide past, while far at sea is the mirage of a huge ferry. A thin dog splashes by and puts up several oystercatchers, which fly off with loud peeps over the bright water.

Smedmore Open Day
Smedmore video
Watch a video made at the most recent Open Day showing the guides in action and many of the interesting rooms at Smedmore House.

The Etches Collection Museum of Jurassic Marine Life opens in Kimmeridge this weekend.  The museum, funded in part by the Heritage Lottery Fund, is built on land given by the Smedmore Estate which also waived all claims to fossils found on the estate.  It shows the collection of fossils amassed locally by Steve Etches a village resident.

Philip Mansel, the owner of Smedmore House, recently gave the eulogy at the funeral of his aunt, Lady Crofton, “Aunt Liz” who died on August 8th aged 96.   This tells the story of her very interesting life and gives an insight into life at Smedmore during the last century.

Smedmore House and owner Philip Mansel were featured in the first episode of Land of Hope and Glory, a BBC documentary about British country life shown yesterday.

You can watch it here

A statue by Anthony Gormley has been installed on Kimmeridge Bay as part of  the Landmark Trust’s  50th Anniversary Celebrations.  There are 5 statues in all in five different Landmark sites and each work has been conceived in direct response to its location.

“The Landmark Trust’s 50th anniversary is an occasion to think and feel the nature of our species, its history and future, and its relationship to the huge biodiversity of living beings that exist on the surface of this extraordinary blue planet.”Antony Gormley 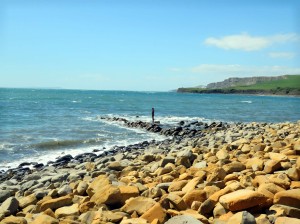 Kimmeridge Bay was featured on last evening’s edition of Countryfile.  An interesting piece about the work of the Fine Centre and the nature of the bay.

Dr Mansel’s Two Sisters at the Western Front display is currently featured on page 32 of the 5th February 2014 edition of Country Life.

Today it was officially announced that the Kimmeridge Project has been successful in its application and awarded a 2.7 million Grant from the Heritage Lottery Fund. Work can now start on building the Fossil Museum in the Village to house the Etches collection which is due to be opened in 2016.  National coverage was provided by the BBC.

Clavell Tower, our estate landmark is currently being featured in the opening and closing credits of BBC News South Today.

Recent changes at Smedmore include the hanging of the dining room with over 100 Furstenberg plates, made in the eighteenth century at the china factory of the dukes of Brunswick; the creation of a Mediterranean garden and a Turkish Room; and the installation of a ‘War Room’ in the former Butler’s Pantry, displaying letters and photographs of the owner’s two great-aunts, who served as nurses with the French army in the First World War .

The final Plans for the Submission of our Round two application for a Lottery Grant was unanimously passed at the Village Meeting last Evening.  The updated plans took into account the comments made at the previous Kimmeridge Project open Meeting and suggestions from other interested bodies.  The final design should to prove to provide a secure and permanent home for the globally important Etches Kimmeridge Clay Fossil Collection, in a world class facility. 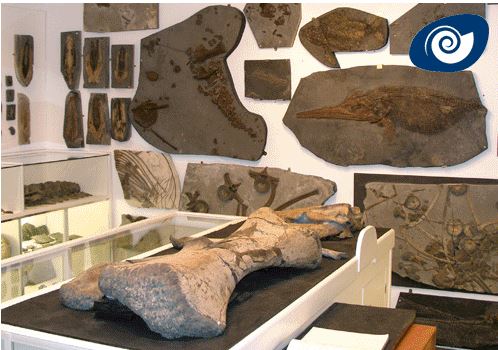 
Marcia and Juliet at the Western Front: new display at Smedmore House Kimmeridge, Dorset, opened on the 14th of September 2013

Born at Smedmore, in 1890 and 1893 respectively, both served as nurses on the western front. Their mother Mildred Ella Mansel (‘Mully’`) had typed out, as a personal war memorial,  a selection of their letters. They were recently found in an attic.  With 50 photographs, they form the basis of the display. It is arranged in six panels: Family, Nursing, Hospitals, 1918, 1919 and Later Life. 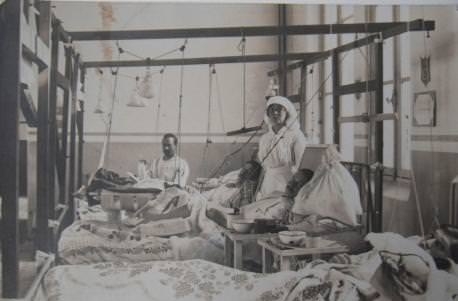 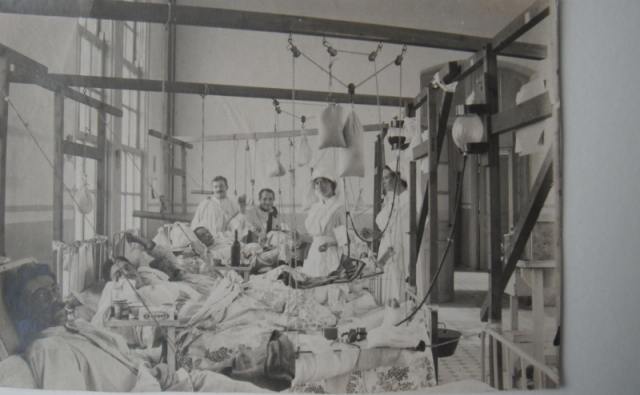 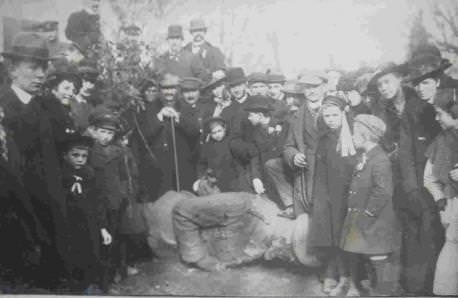 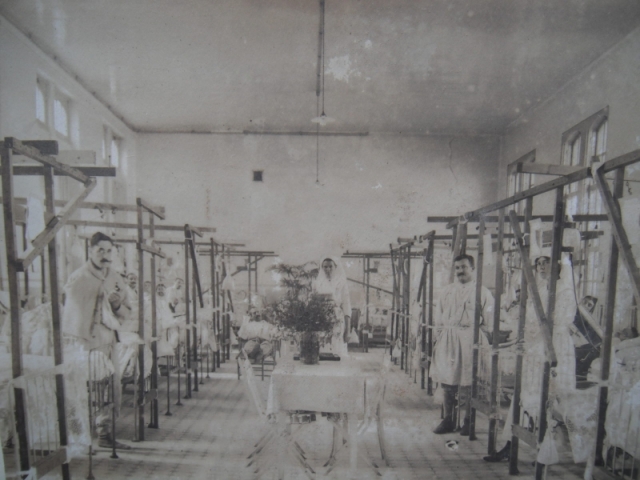 Marcia’s husband, Captain Oswald Walker, whom she had married in 1910, was killed in the early weeks of the war. After courses at St Thomas’s, Marcia and Juliet volunteered to nurse, first with the British Red Cross, after 1917 with the Secours aux Blesses Militaires section of the French Red Cross. They thought French hospitals more challenging than British ones, as nearer to the front.

The letters show the sisters’ pride in working for their country  and  advancing women’s rights (their mother had been a militant suffragette, sentenced to a week in prison for breaking windows of the War Office); the course of the war  , especially in 1918; and their love of France.  They are so direct that they need no commentary.  Here are some quotations:

It’s so glorious to be allowed to nurse them and to do “tout son possible” for these petits poilus, these little heroes of nowadays.

I must tell my Mum that it is a tremendous honour being taken on by the French Army. It is the first time since the very beginning that nurses (English) have been allowed to belong to the French Army as the stories about some most undesirable ones were so awful at first, Joffre refused to allow any more… we mean to do very well for the honour of our nation!

How glorious it was about the suffrage bill [giving women over 30 the vote after the war]. Of course, all my thoughts were with you and Grannie. Such as immense majority… I consider the 30 age limit very high, but of course they will soon find that is lowered.

It is wonderful, I think, to watch the women’s work in this war, the capability, the patriotism, the endurance, the courage of women has given them the vote. We have left the French far behind in this.

We had 250 grands blessés in at one go. The doctors were operating for 36 hours on end. Since the 31st it has been a ceaseless flow. It was my turn to sit up the night of the 31st and I shall never forget it. We had 40 very bad cases in during the night on my floor, all just operated on.

Juliet witnessed the allied retreat and counter-attack in 1918, and the French army’s entry into Alsace, after forty-eight years of German occupation. She wrote from Metz on 20 November 1918:

We went and watched the soldiers and the Alsatian girls in their fascinating dresses dancing round by torchlight in the great square before the prefecture, so lovely that one felt one must be dreaming. In the middle we all went out and joined in a marvellous torchlight procession round the town with all the troops, nearly every Poilu carrying a torch, fuses going up, simply wonderful. …A riotous evening and such enormous fun. I never felt so elated in my life.

In 1920 Marcia  married a French officer, Francois de Juge Montespieu (d.1940), for 20 years world show-jumping champion. They lived in the family property of Seran at Lavaur in the Tarn, and  had four children. She died at Seran in 1973.

Juliet witnessed the allied victory parade through Paris in July 1919 (her ecstatic account is in the display),  went on the stage, taught at RADA, translated plays from French into English, and died, unmarried, in 1982. She is buried at Kimmeridge. For their services in the First World War,  both sisters won the Croix de Guerre.  Marcia won a second for serving as a nurse with the French army again, in 1940.